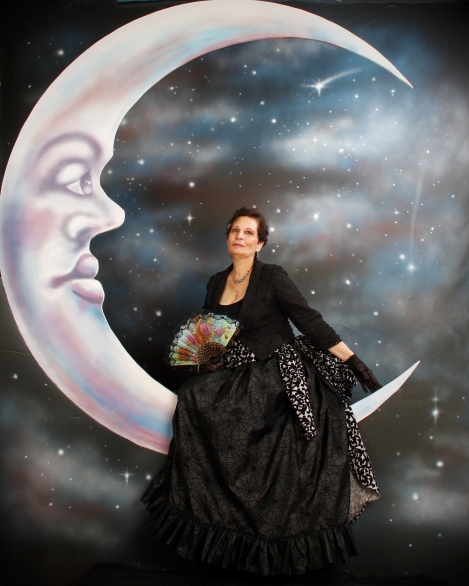 I recently had the pleasure of interviewing South Jersey author Marie Gilbert. A steampunk and zombie enthusiast, Marie has written a book called Roof Oasis.

Loretta:  You have a blog with quite a following. How did you get started blogging?

Marie:  While working at the Academy of Natural Sciences, I had never blogged, but I was following blogs. After I joined the South Jersey Writers’ Group, Amy Hollinger, president of the group, and Krista Magrowski, vice president of the group had suggested that I put all my funny family stories on a blog. Amy helped me set it up and over time, Glenn Walker, helped me maneuver my way through all the blog functions on blogspot.com.  I began to write about my road trips with family and friends, about attending Steampunk events, and of course, my ghost investigations.

I learned through the comments that were posted on my blog that people were very interested in what I was doing on these weekly adventures. I had people following me from England, China and Canada following some of my blogs depending on what my posts covered in that particular blog.

When I began to blog about my becoming a member of the Zombie Squad, I think I really hit on something that was important to people; zombies and survival. I noticed that the posts where I talked about my love for Steampunk and ghost investigations brought in the most visitors to my site. But, it wasn’t until I began my weekly episodes of Life with Fred & Lucy that the number of followers to my site grew the most. I try to do a bit of everything on my blog including interviews of local entrepreneurs and Independent Film directors, producers and actors. I love interviewing people. You can learn so much about a person and their dreams by just asking, “Tell me a little bit about you and what you do.”

I have made many good friends over the years through my blogs and I hope to make many more.

Loretta: Your many interests include steampunk and zombies. How did that come about?

Marie: My love of Steampunk was due to my granddaughter Allie Gilbert. She was attending Moore College of Art and Design at the same time that I was working at the Academy of Natural Sciences. One day after work, she asked me to accompany her to a big event in Center City. She dressed me up in one of her Victorian outfits and off we went to Dorian’s Parlor with me looking like Jane Eyre. It was love at first sight. I loved the people, the outfits, the entertainment that Dorian’s offered and I was hooked. This blog post for Biff Bam Pop, explains it best. http://biffbampop.com/2013/01/01/enter-2013-with-biff-bam-pops-steampunk-granny/

As for zombies, I’ve had a love/hate relationship with the shuffling dead ever since I watched “Night of the Living Dead” at a drive-in theatre in 1968. I, the lover of everything horror, was hooked. Scared to death, but hooked into learning everything I could about the walking dead. I posted how I became a member of the Zombie Squad for Biff Bam Pop http://biffbampop.com/2012/12/17/be-prepared-marie-g-on-zombies-and-the-zombie-squad/  and this leads to your next question.

Loretta:  What inspired you to write Roof Oasis?

Marie:  Roof Oasis happened because of events that were and or going on now. I mentioned this on Kevin’s interview but I’ll share it here, too. There are things being put in our food and no one is stopping this. We don’t know the long term damages that hormones, antibiotics and the use of GMO’s have on us. There is an old saying, “You are what you eat.” I believe in this. We are only as healthy as the food we eat.  What also bothered me was how easily people are willing to let others think for them. They believe what the news tells them even when they know it’s a lie. We should do our own investigation of stories to make sure we’re not being fed an unhealthy dose of bullshit. Excuse my language. So that was my mind set a few months after retiring. I began working on and completed a novel called Beware the Harvesters, but something happened on the way to getting this novel published. The secondary characters began to take over the story, fighting for their rightful place in my imagination and on the page. Roof Oasis was my way of satisfying one of my character’s demands to tell her story her way. Alas, this character still holds reign over my story. Book two of my apocalyptic series, Saving Solanda, will be out this summer, followed by two more books.

Loretta: What can we look forward to from Marie Gilbert in the future?

Marie:  What are my plans for the future? Well, I’ve been sending NASA notes telling them that I would like to volunteer for the first manned mission to mars, but they haven’t replied as of yet. I hope to have book two of the Roof Oasis series done this summer. My editor, Patti O’Brien loved the first part that I had sent her. I’ll be working on book three after Saving Solanda is published. I have my Life with Fred & Lucy that I hope to also get published the next year. Right now, I’m doing something brand new and that is screen writing. I was asked by an Independent Film Director, Christopher Eilenstine, to be one of his writers for a new film called Shadows of the Forest. You can find the information here: https://www.facebook.com/shadowsoftheforest/info?tab=page_info

I’m also looking forward to doing more private ghost investigations, so if anyone out there thinks they have a ghost, contact me. http://gilbertcuriosities.blogspot.com/p/blog-page.html

First and most important, I’m a grandmother to nine talented and amazing grandchildren. I want to spend my life taking them on all kinds of adventures. I’m very proud of all of them and I’d like to think I’ve influenced them somewhat. My advice to them has always been: think outside the box, live your dream, be a person of honor, and last but most important, don’t ever let anyone clip your wings. I guess this advice would also be useful for any upcoming authors out there.

Loretta: Thank you, Marie, for taking the time to chat.

You can follow Marie’s adventures on her blog Gilbert Curiosities

In the Hot Seat:  Marie Gilbert by Kevin Stephany

My Tweets
Follow Tails of Mirth & Madness on WordPress.com