Last but not least of our crew to introduce is Tiki. When she came to live with us in 2012, she became cat #4 behind Annie, Ozzy, and Tiger. She has since moved to cat #2 in the hierarchy, after the passing of Annie and Ozzy. She rounds out our fur family which consists of 4 cats and 2 dogs.

Tiki is the second cat I adopted through volunteering. She’s a big girl, who was approximately five years old when we met. She’s a dilute calico, which means that instead of having the usual black, orange, and white fur, her colors are “diluted.” Her coat is gray, tan, and white. I have always wanted a calico cat. Did you know that almost all calico kitties are female? I didn’t, which is why I thought I could easily find a male. Apparently a male is a very rare find.

Tiki is a doll and a beautiful cat, if I do say so myself. I would reach into her cage every shift to pet her, and she would just roll onto her back, loving the attention. She’s a huge cuddle bug.

One morning I was cleaning the cages, with Tiki watching. As I walked past her, out came a white paw with a gentle “notice me” swat. Assuming she wanted a break from her confines, I opened her door and I sat on the bench. Once free, she climbed into my lap, standing up to put her face close to mine. I wasn’t sure what she was doing, but she started licking my nose, giving me kisses. So much for sticking to three cats at home.

I inquired about her and was told that a family was supposed to bring her home, but they never came back for her. It happens. Sometimes people change their minds or go to another shelter. Their loss was my gain, because this girl is fabulous.

She’s a mommy’s girl through and through and I wouldn’t have it any other way. She’s the only female of the fur kids, so we girls have to stick together. She’s often one of the first to arrive to greet me after work, and later watches television with me. Tiki is a lap cat and my bed buddy. As soon as I go into bed, I can count on Tiki to spend the night curled up next to me, sometimes with her head on my pillow. If it’s a cold winter night, she doesn’t mind being covered with a blanket. Since I sleep on my left side, she curls up there, preferring that I drape my right arm across her, with her head cradled in my hand. More often than not we fall asleep like that.

I don’t know what I would do without my girl; she’s such great company. I miss her on the occasional nights when she might choose to sleep elsewhere, or when we travel. It’s said that animals looking for homes often choose their new people, and I’m so glad Tiki chose me.

Cuddled in the Crook of My Arm

A Sighthound? Maybe Not So Much

What do you do when you have a rescue animal with an unknown birthdate? In our house, we assign them a birthday. You could choose a date that means something to you, or you could choose a date based on the pet’s personality. Knowing Red as we do, we gave him the birthday of April 1, 2003 (the year is likely correct).

He never fails to amuse us with his hijinks, but his name is a misnomer. Although that was his name when we adopted him and his fur is a reddish brown, we learned early on that Linus or Timex would have worked just as well for names.

Just as Linus from Peanuts is attached to his blue blanket, Red is attached to his toys. Like a lot of dogs, he has an overflowing toy box, but still clings to his ratty stuffed rings, elephant, and platypus. He loves them so much that they end up in his bed, in our bed, the car, and even outside, as shown in the above photo. Sometimes he refuses to go for a walk unless he has one of these items stuffed into his mouth. It’s cute until he drops it mid-walk, leaving me to carry it the rest of the way.

Even when he’s creating a mess, we still laugh when we should probably be annoyed with him. When the pups were younger and attending playdates, you could count on Red to vomit in the car. Nothing we tried seemed to cure his car sickness, so his grandmother would sit in the back seat with him, a plastic bag at the ready. Every. Single. Trip. You can never question her love for her granddogs.

Red would later repay Grandmom for her kindness with a rather gross gift, a dead bird he brought into the house when she was dog sitting. He didn’t understand why she wasn’t grateful for his present, but I was glad that I wasn’t there for that spectacle. We called him Bird Face for a while after his avian encounter.

Red was never a graceful dog; long before he developed neurological issues, he was clumsy. I had a candle warmer on a living room end table, melting a 22-ounce candle. It was largely liquefied when Red managed to get caught in the cord and pull it down. Wax went everywhere, on the wall and carpet, and even in the outlet where it was plugged in. Worst of all, blue candle wax dripped from his red fawn coat, yet he was stoic about his predicament. I was so relieved that he didn’t burn his delicate skin, but I can tell you that wax removal from a dog is no fun.

Italian Greyhounds think they’re indestructible and Red is no exception. He managed to suffer a nasty chest scrape when he was running through the yard and failed to stop at the brick retaining wall. That had to hurt, but yet again he seemed unfazed.

Neither the wax nor wall incident bothered him. Remember Timex watches that take a licking and keep on ticking? That’s our Red, our April fool. He’s a small court jester in a fur coat.

Happy Easter to those of you who celebrate, and Happy Sunday to those who do not. Since bunnies are synonymous with the holiday, I thought today would be an appropriate time to introduce you to a rabbit dear to my heart, and the cool story of how I acquired her.

I’ve loved bunny rabbits since I was involved with 4-H many years ago. I wanted an English Lop, a bunny with extremely long ears, similar to a Basset Hound. Well, I got my breeds confused, and answered a newspaper ad for French Lop bunnies for sale. They’re also large rabbits but with much shorter lop ears. Think of them as the Beagles of bunnies.

The man selling them raised his bunnies for rabbit shows and also for his magic act. A magician! How cool is that? I brought home a doe (female) with chinchilla-colored fur, and named her Cleopatra, or Cleo for short.

She was a big, beautiful bunny with a lush gray coat and expressive brown eyes, loaded with personality. She was more dog than rabbit, nudging my hand with her large head for attention. Cleo was friendly, and loved to pluck yogurt drops from my open hand. She tolerated well the gentle brushing and nail trims, but was never a fan of ear cleanings, not that I could blame her. She was groomed often, as I was into showing rabbits at the time, and Cleo fit the breed standard for a French Lop. However, she wasn’t the greatest specimen of her kind, as the judges noted time and time again in their remarks.

Show after show we would try for a ribbon. Sometimes we had success, and other times we left empty-handed. Aside from taking home a prize, it was a good day if your entry didn’t pee on the judge or hop down the table to visit the competition.

An inconsistent winner, the magician’s bunny had a trick up her furry sleeve. She went on to become a Grand Champion, a prestigious achievement in the rabbit show world. I had other rabbits reach this title, but somehow Cleo’s award was a bit more special. I knew she was close, just one step away from the big prize, but that last needed win eluded her for a long time. Persistence paid off, and she finally won the last leg required for her grand championship.

Although I was overjoyed by her achievement, that was not my proudest bunny moment. That came when we were on the show floor when a spectator asked to take her picture. Someone else saw in her what I did, and wanted to capture my big girl on film. I can’t remember her wins specifically, but I can recall this incident with great fondness.

After Cleo became Grand Champion Cleopatra, her rabbit show days were over. She was loved and spoiled the rest of her days, passing away around eight years old of what the vet suspected was a brain tumor. Our time together may have been short, but it was magic. 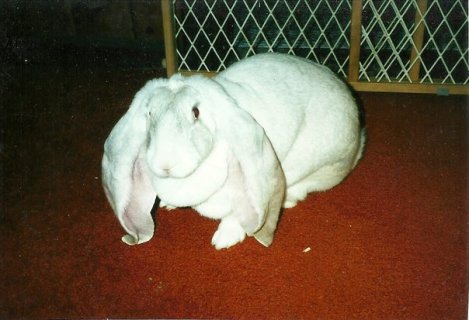