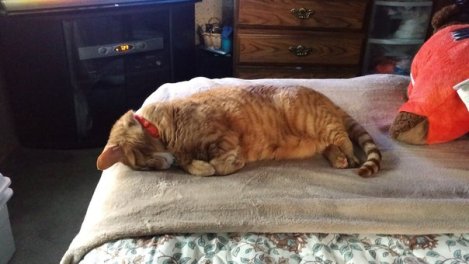 Not to be outdone by brother Moose, Tiger celebrated his own Gotcha Day recently. February 22, 2018, marked nine years since the orange tabby with attitude came to live with us. However, in that time he’s sometimes given us quite a scare.

We have learned that Tiger has a unique skill, something not done by any cat we’ve ever had. Perhaps he picked up this talent from watching his canine siblings. Italian Greyhounds love to burrow in their blankets, but what about cats?

When Tiger first came home, he was a dreaded door darter. This is not unusual for a cat who was allowed both inside and outside by his previous owner, but it is a problem since all of our cats are kept strictly indoors. Tiger got out our back door three times into the yard, and three times I was able to grab him and thwart any notion of freedom that he had. It seems he has since lost interest in this pursuit, but you have to remain vigilant when it comes to open doors. We live on a heavily traveled road, so a positive outcome for an escapee is unlikely.

We do a head count of the fur kids as a matter of course in our house. I also tend to do this when I’m doing the laundry, because I worry about a kitty taking an unintended ride in a Whirlpool. Every time we go out, and before bed, we check everyone’s location. Prior to implementing this practice, poor Tiger once spent a chilly night in the laundry room closet before being discovered the next morning.

One night during our rounds before lights out, we couldn’t find the cranky orange tabby. After checking the usual hiding spots and coming up empty, panic began to set in. Did he sneak down the basement stairs unnoticed? Worse yet, did he slip outside the safety of the house? That’s my biggest fear, one of the cats getting out the door and losing them forever. We continued the search, but still couldn’t find him. I called his name and even shook the treat bag, which summoned all the cats except Tiger. Where was he?

It seems our boy got tired and maybe a little chilly and called it a night early. A close inspection of our bed found a mysterious lump beneath the comforter. Peeling back the bedclothes revealed a blinking orange tabby, oblivious to the chest pain he was causing his pet parents. His hiding spot uncovered, he calmly stretched and walked into the other room, relinquishing the queen-size bed to its rightful owners.

I have since observed Tiger burrowing under the covers. He will also disappear under the comforter on the bed, or under the throw we keep on the couch for the dogs. You have to be careful where you sit or you could wind up with a claw to the backside. I wonder how the dogs feel about sharing their blankets, and I also wonder if I should have a cardiologist on speed dial. 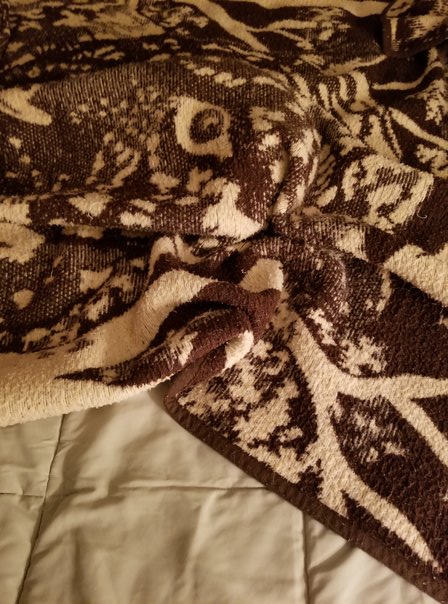 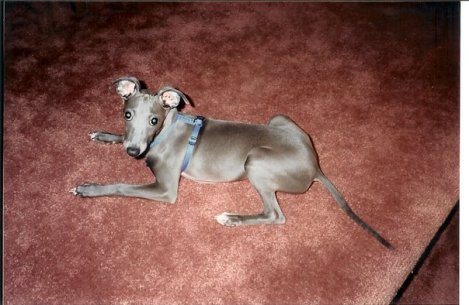 I didn’t know Gotcha Day is a thing, but apparently it is. It’s the date when you bring home a new pet, which I prefer to call a family member. On February 9, we celebrated 15 years of being owned by Moose.

I remember well the events leading up to bringing him home, which I recounted in To Moose, With Love. I still have the tiny sweater he wore on his way home. Looking at it now, it’s hard to believe he was ever so small. He outgrew it years ago, but I can’t part with it.

Moose has always been adaptable. In the 15 years since he’s been with us, he has welcomed another Italian Greyhound, and has seen cats come and go. I’ve never had a problem with him getting along with the other animals. Sometimes he has squabbles with his canine brother Red, but it’s never anything serious. At least nothing serious anymore. When Moose was much younger he pinned Red to the kitchen floor over a Christmas Eve lunchmeat tray. That was the worst quarrel they ever had, and the only time I had to intervene.

Moose had an active social life at one time. I met some wonderful people and their dogs through a now-defunct website. We attended several area playdates, even venturing to a few out of state. They were fun social events for both dogs and humans. I’m still in contact with some of the people, but sadly, Moose and Red are among the few dogs remaining from the original group.

Moose loves to go for walks, and he wants to greet every dog or person he meets on the street. He’s always been outgoing and social, even at the vet’s office. He enjoys outdoor activities, and we would take him everywhere. He doesn’t go on many walks or adventures these days, preferring to lounge on the couch or walk around his yard in his senior years. A few years ago I took him to a town yard sale, which was teeming with people and dogs, and his demeanor was different. He seemed shy and uncomfortable. I thought then that the gradual loss of his hearing and vision was affecting him. However, there are times when he’s his normal self. We have an opportunity to participate in a charity dog walk in the coming months, so we hope he will enjoy it.

Although Moose came from a pet store (before we knew about the horrors of puppy mills), he is one of the best purchases we ever made. (The retail chain where we found him has since gone out of business). Considering where he came from, we have been very lucky regarding his health. Other than an occasional seizure, and a leaking heart valve not requiring treatment at this time, he is in good shape for his advanced age. For someone who would have been fine without a dog, I can’t imagine being without him. He has brought me immeasurable joy, and Moose is always there to snuggle whenever I need him. I can only hope that we have many more Gotcha Days ahead of us. 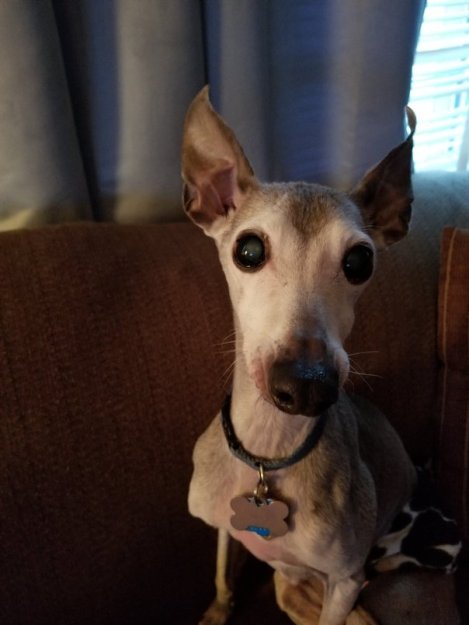