I love Tiger to pieces. He can be a crabby tabby on a good day, but when he’s hungry, he takes crabby to a new level. He’s the only cat I’ve had who gets cranky at meal times.

If you read Rude Awakening, you know that when Tiger wants to eat, he wants to eat now. After the pestering, one of us staggers into the kitchen, tripping over assorted pets, to get their food together. If I have a.m. food duty (and most of the time I do, morning person that I am), their wait is extended because mom needs her coffee first. Otherwise, who knows what I will feed them in my fog. I figure that they have waited hours between meals already, so what difference does a couple minutes make?

Well, to them a few minutes makes all the difference, especially to Tiger. If I go upstairs to do something before I feed him, he often follows me. He voices his displeasure at my dawdling, and either tries to bite my feet or swat me. When I return to the first floor, he runs ahead of me, I guess he thinks he’s my guide to the kitchen, in case I forgot where it was.

He walks through the kitchen hissing and growling, to let everyone know that he is not happy. I can’t help but laugh, because it is comical. Food distribution is a production with two dogs and four cats milling under your feet.

A hungry Tiger lashes out at not only me, but also the animal inhabitants of the house. He will swat the dogs who aren’t doing anything but waiting themselves. Barney and Tiki are also on the receiving end of his ire, but it’s poor Vlad that takes the brunt of Tiger’s wrath. I think the orange bully knows that his brother is a lover and not a fighter, and uses that to his advantage. Barney and Tiki are more likely to stand up to Tiger swat to swat. Of course, before he starts terrorizing his brothers and sister, he gives them the stink eye. It’s a look that says don’t mess with me, I am hungry, and I am eating first! Tiger may have hierarchy in the feline population, but both Moose and Red came before him.

I use part of the pantry shelf to arrange the bowls to keep them from swarming me. Sometimes when I’m getting their meds to mix in with the food, I see Tiger on the shelf trying to get to his meal. He is the only one to do that, impatient brat that he is.

The dogs are fed first, followed by the cats. Tiger’s mood changes when I walk with him to the bathroom, his breakfast in hand. Everyone eats in separate rooms to avoid any squabbles over food, and it makes it easier for me to keep track of who is or isn’t eating at any given time.

When Tiger finishes breakfast, the crankiness is gone. He retreats into bed and continues to do what he does best—ignore me.

Waiting for the Doc

Moose is in good shape for his age, with his recent vet appointment results consistent with a dog of 16 years. Just as humans have specialists, so too, do dogs. A cardiology appointment for Moose always brings about some anxiety for us. We hope for the best yet prepare for the worst, but fortunately, the news was good.

Moose hadn’t seen his heart doctor in a while, so we scheduled an appointment to check his degenerative chronic mitral valve disease. He is on a medication to slow its progression, and we wanted to see if it was helping with his issue. Perhaps a change might be needed.

Moose and Red tend to do everything together, but in this instance, we felt it best that Red stay home. He wouldn’t have been able to be with his brother during tests, and he would have been antsy stuck in an unfamiliar place for a few hours.

The waiting room was filled with pets waiting to see various specialists. On this visit, Moose was his normal outgoing self, curious about the other animals and their people.

A veterinary student called Moose back for a quick exam. He passed his weight, heart, and lung check, but failed for dirty ears. As much as Red licks his ears, they should be spotless. We plan to address this issue at their next mani/pedi appointment with their regular vet.

After the quick checkup, Moose was taken back for further study by the cardiologist, to emerge an hour and a half to two hours later. Luckily there are plenty of places to eat in the area, and his appointment happened to coordinate with lunch time. It was just sad that the little guy wouldn’t be there to share the meal.

Of course, the time frame elapses at a snail’s pace when you’re waiting for your best friend. When you first see your baby, you’re elated but then worry about the results. The doctor put our fears to rest.

Moose had an echocardiogram during his visit. The medication is working well. There were no changes since his prior visit, and the course of treatment remains the same. The cardiologist couldn’t believe that Moose will celebrate 17 years in November.

Moose had the best visit we could hope for, and another visit in 6 to 9 months is recommended. We were advised to continue to check his respiration rate to be sure it is in the normal range, and we should also be wary of any signs of his condition worsening, such as coughing or wheezing. I admit that I try to keep Moose in a bubble so his heart doesn’t get worse. I also make sure he isn’t exerting himself too much or overheating under the blankets. Walks are rare, but the vet encouraged us to get him out more. His heart is stable at the present time, but now I’m the one going to need a cardiologist after all the stress, but it was worth it for my Moo. 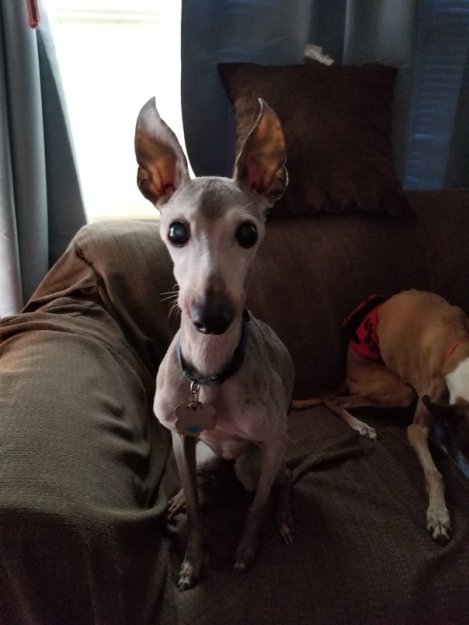 Chillin on the Couch