She wasn’t the cutest kitten I’ve ever seen. In fact, she was quite plain. It was when a little brown tabby ran across the floor did I realize my fiancé had no idea what I meant by a calico cat. I expressed interest in a male calico which I found out doesn’t exist. All calicos are female and I wanted a male, so I got neither. What I got was a female brown tabby.

It was 1998 when we moved into our apartment. We knew animals were prohibited in our lease, but I couldn’t stand being without a pet. My cat Mitzi stayed with my parents and I missed her. My fiancé and I agreed to get a cat with the caveat that if it were discovered and posed a problem, we would move (cat included) to more animal-friendly lodgings.

How would we acquire a kitten? I wanted to adopt, but that would require telling a falsehood on the application, something I didn’t want to do. Our landlord had a no-pet clause in the lease and there was no way around that.

My fiancé was quite pleased with himself, as he never had a cat before. Someone he knew from work’s cat had a litter of kittens. When he went to see them, there was only one left. If he didn’t take her for free, they would have kept her, but she would have been an indoor/outdoor cat in Philadelphia. That thought is alarming. We keep our cats strictly inside. Not wanting that to happen, my husband-to-be brought home the little brown ball.

She was cute for a brown cat, but not what I had in mind. We named her Annie, but we had no way of knowing that would be short for Annie Christ, a moniker later given to her by my brother.

We had her vetted to discover that she had ear mites. Have you ever given ear drops to a mountain lion? I think administering them to a feisty, biting, clawing kitten is a close second. We could have used falconer’s gloves for the task, she was such a bad patient.

Finally mite free, Annie was spayed and declawed. (Did you know that declawing is akin to amputating up to and including the first joint of human fingers? It’s a surgery we no longer put our cats through).

Annie enjoyed biting our ankles, hiding inside our recliner, and stealing food. She ate strawberry shortcake, Doritos, and once made off with a ham slice as big as her body. You would think we never fed her, but she enjoyed her cat food, weighing 14 pounds in her heyday.

Any paranoia we had about her discovery was unfounded. The no-pet policy was more of a suggestion. It turned out that many people in the complex had cats, management included. As long as kitty wasn’t seen, heard, or smelled, a blind eye was turned to the animal.

Annie was with us the three years we lived there, even tagging along with us to my parents’ house for a long 4th of July weekend when our air conditioner broke, leaving our upstairs unit sweltering. Annie repaid her grandparents’ kindness by peeing on their bathroom floor. I think they were glad to see us go.

Our girl was the last and most precious item we moved from the apartment to our house. Annie is the original grumpy cat. Not only does she look miserable, she is miserable. She cares for us in her own way, but she was never warm and fuzzy. You can pet her for about two seconds before she tries to bite you. We say we coexist and feed her to keep her from killing us in our sleep.

We have been in our house 15 years and during that time Annie hasn’t exactly welcomed 2 dogs and 3 more cats. She tolerates them, but that’s about it. The others know she is the boss, even the cats with claws are afraid of her. If it’s true that only the good die young, she should live forever, and I hope she does. I love you, Annie. 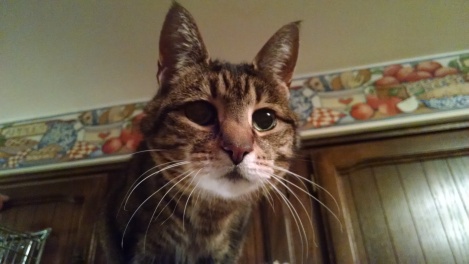