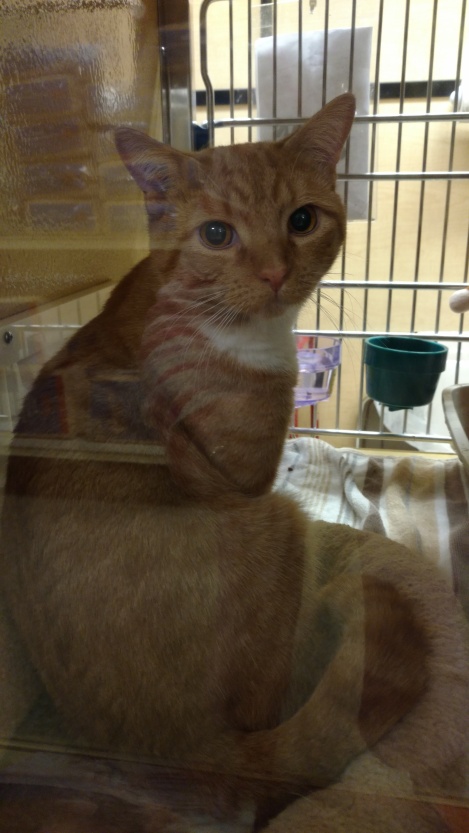 After losing two cats exactly a year apart, on June 2, we added a new kitty to our family. Meet petite, one year old, Barnabas Collins, also known as Barney. He’s an orange and white tabby, named after the fictional vampire on the television series Dark Shadows. I’ve never seen the show, but the name sounds cool.

We decided to adopt two more cats into our household. These are not replacements, mind you, as like humans, each cat is an individual. Since my husband has never had a say in any of the cats we acquired, I told him I thought he should pick out one of them. (I had my heart set on a black cat, more on that in a future post).

Of course I wanted to adopt from the shelter where I volunteer, so when we were approved I started checking out the black cats. There were two in the PetSmart where I volunteer, but neither were the right fit. The shelter also has an adoption center in another local PetSmart, so we stopped one afternoon when they were closed. They had one black cat that I wanted to come back and see. In the cage below him was a small orange and white tabby. Hubby talked to him through the Plexiglas and the little furball rolled over to show his belly.

We returned the next night to visit the black cat named Dodger. While I spoke with him, the orange and white ball named Trapper was grabbing at me from his cage below. I ignored him, wanting a black cat for so long. Dodger was a great cat with people, but not a huge fan of other cats. He wouldn’t mesh with our two other cats and two small dogs at home. (I am happy to report that he was later adopted). 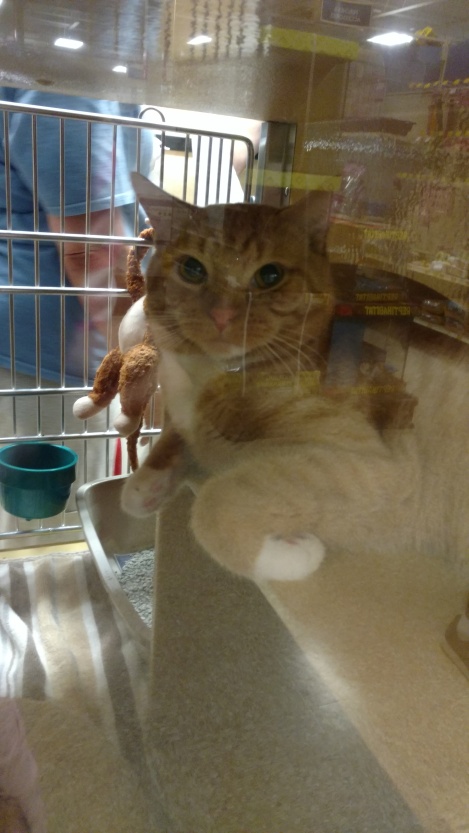 Hubby wanted to see Trapper, and while I chatted with the other volunteers, he made a new friend. I didn’t interact much with the furry little guy, but he had fallen asleep in his new daddy’s hands. I thought I would find my black cat before hubby found his cat, but it didn’t work out that way. In fact, this cat was exactly what I didn’t want. I didn’t want another orange cat (our Tiger is orange), but at least he has four white paws and socks, and white from chin to belly. I like big cats, and he weighed in at a whopping 7.9 pounds at his well vet visit. I’m used to 12 and 14 pound cats, when they got down to Barnabas’s weight they died. He’s not a kitten, but I would have preferred an older cat. The shelter said he was 1 to 2 years old, but the vet believes he is closer to a year old. This means he gets into stuff. Confined to one room in the beginning, he spent his days knocking the phone off the hook and pulling books off the shelves. Our resident cats are believed to be around 8 and 9, estimates since they were also adopted from the shelter. I hope he doesn’t annoy them. As much as I didn’t want him, I love him. He has me wrapped around his little paw already, and I don’t regret a thing about adopting him.

The spare room that was the sick ward when our beloved Ozzy suffered setbacks now has renewed life to it. We’re no longer keeping watch over our handsome Russian Blue/tabby, praying he will recover from his latest tummy trouble. He is at peace, leaving us at age 14, after 11 years of chronic illness. Now there’s a young man to explore all the room’s corners, and play with the toys that now cover the floor.

Trapper was renamed Barnabas Collins by my hubby and is now a member of the family. His introduction to the rest of the gang was delayed because he came with an intestinal parasite, causing the need for isolation until it was resolved. I’m happy to report he is integrating with the others just fine. 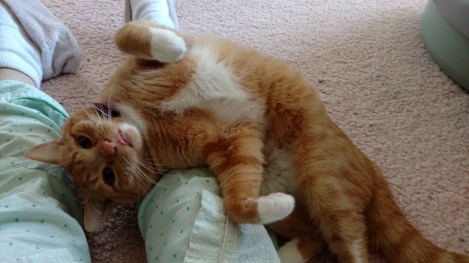