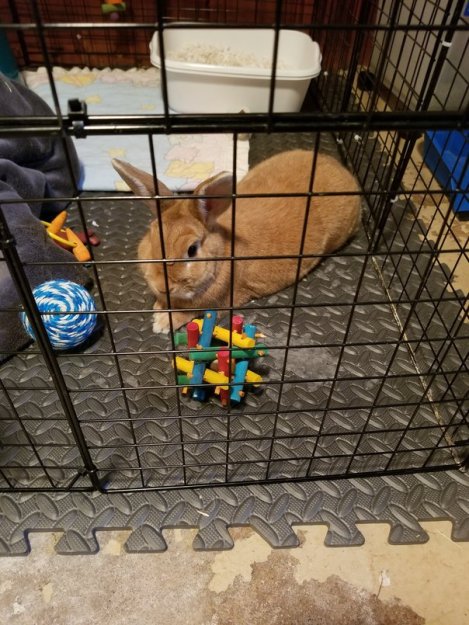 Bugs Ready for His Close Up

Bunny habitats have evolved over the years. From wood hutches to wire-constructed cages, nothing can compare to today’s rabbit castles. My current rabbit is one lucky boy.

While none of my animals were ever kept outside, I knew people who housed rabbits in wood and chicken wire hutches, and the animals did just fine. My first bunnies lived in my parents’ basement, in wire cages purchased through a catalog. They had solid metal trays that slid out beneath the wire floor, lined with newspaper to collect waste. However, wire floors could hurt bunny feet, especially the large breeds. To help prevent this, I had resting boards, which were slabs of hard plastic with holes for any messes to fall through. That seemed to be a better surface (at that time) for the bunny to sit on.

I later switched from wire cages with pans to cages with deep plastic bottoms, which could be filled with a variety of bedding material. These enclosures needed frequent changing, as the pet lived directly on the material that they would eventually soil, unless the bun was litter box trained.

It wasn’t until Bugs came home that I discovered the joys of litter box trained buns and roomy living quarters. I’m not sure how he was taught, but Bugs eliminates in a dishpan-turned-litter box filled with absorbent bedding. This makes keeping his house clean a snap. His enclosure is constructed from wire storage cubes, and has no top or bottom. The wire cubes sit on foam puzzle pieces easily found in stores or online. This gives him a cushy place to hop, instead of sitting the cage directly on the concrete basement floor.

He has a roomy, soft area to move around, filled with things to make a bunny happy. Bugs has a combination pellet/hay rack, which I only use to hold pellets now that I discovered that the divider holding the hay in place is missing. Because of this, he has a separate hay rack hanging from the wire cube, above his litter box. Bugs also has a separate dish for his salads, and right now he enjoys parsley and cilantro. He has two blankets that lay atop the foam floor. There’s a large igloo hideout when he wants to feel hidden. Bugs has two chew toys that hang from his enclosure, and he has a variety of toys to keep himself entertained. He has two balls, one that can be rolled and another that can be chewed. There are three chew sticks in his house, in addition to a lava block and bunny rattle that can be tossed.

Every morning I do some light housekeeping. I change his litter box, and sweep up any loose hay, fur, or runaway droppings. I refresh his water, hay, and pellets as needed. When he sees me come down the stairs, he hops to the front of his enclosure and stands up on his hind legs for petting. I really love this little guy. Rabbits do make wonderful additions to your family.