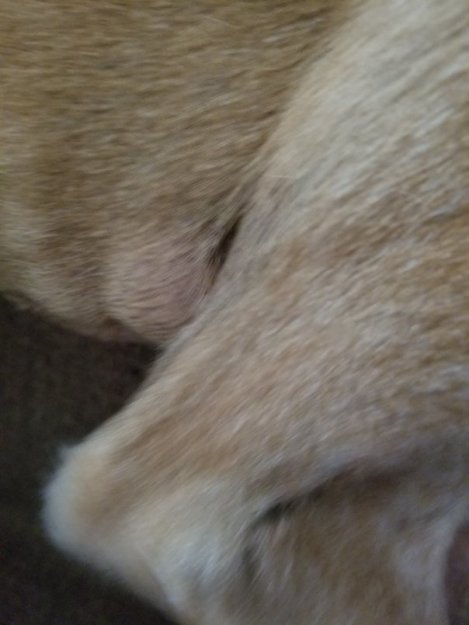 Of the two dogs, Red is far lumpier than Moose. Moose has had fewer lumps needing removal, while Red seems to be a magnet for them. None of the masses have ever proved to be dangerous, but Red has had so many that we started to call him Sir Lumpsalot.

The latest bump was found by accident. We keep baby wipes by the door to clean the dogs after they come in from outside. We wipe down their front legs (the boys have always had bad aim), and their undercarriage before putting their man pants back on them. One day I felt something unusual, and on further inspection saw a growth on the outside of Red’s boy bit. It had a decent size to it, like a pencil eraser, and was pink in color. (Trust me on this, I’m withholding the photo for Red’s modesty). I wasted no time making a vet appointment to have the growth checked.

I figured that whatever it was would need to be removed, but the vet first took a sample of the offending growth in the office. She was looking to see if it was a mast cell tumor. My heart sank. I knew from various dog social media groups that they were bad news. The couple minutes that it took waiting for the results felt like an eternity. My mind raced to all sorts of worst-case scenarios while the vet was out of the room.

She came in and told us that no mast cells were found. I breathed a huge sigh of relief. While that was great news, it still required removal while Red was under anesthesia. That came as no surprise.

We made an appointment for the procedure. Red is a senior, but he doesn’t have the underlying health conditions that Moose has. It would be a quick process, and he wouldn’t be under long. Anxiety is my middle name, so the day of the removal I was a mess. Red on the other hand was just fine.

We sat in the waiting room for Red to be called back. I held him the entire time, and when I had to turn him over to the vet tech, I put on a brave face, saving my tears for the ride home. He had gone through similar procedures several times in the past, so it’s routine to all of us by now. I trust our vet implicitly.

Everything went well. My day dragged on as they always do when you can’t wait to pick up your fur kid in the evening after work. When I saw him, he was rid of the annoying mass, now replaced by three dissolvable purple stitches. All my usual worrying was for naught when we received the call that the growth was indeed benign! The only problem with this latest repair is that he was unable to wear man pants for a couple weeks. Our carpets took a beating for a little while, but Sir Lumpsalot lives to accumulate more lumps! 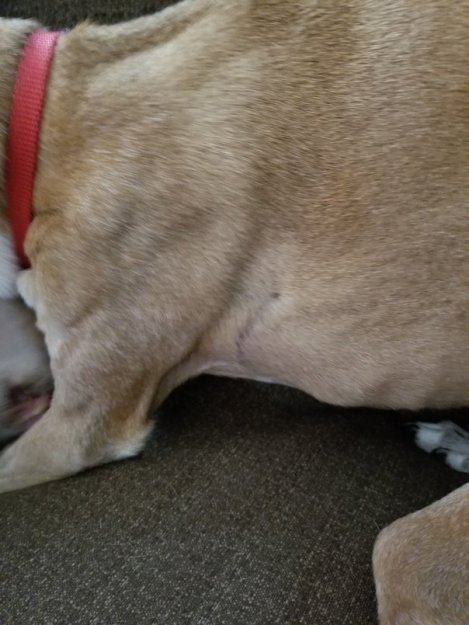 My Tweets
Follow Tails of Mirth & Madness on WordPress.com