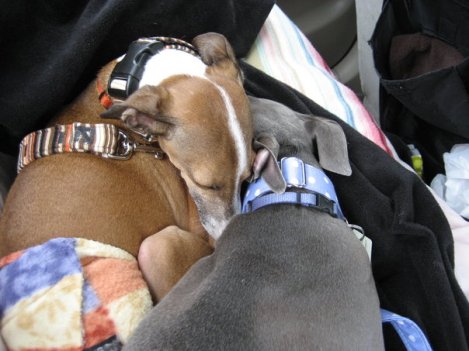 Moose and Red had an active social life when they were younger. They enjoyed play dates with other Italian greyhounds, and we found lots of dog-friendly activities and events for them to attend. Unfortunately, most of the time these fun outings involved a trip in the car.

Moose vomited once in the car when he was a puppy, but that was the lone occurrence. His issue was speed, not car sickness. As long as we were cruising along, he was fine. Stopped in traffic, or even for a light, Moose would bring on the whining. He would start low, increasing in volume to an ear-splitting level. Could you imagine explaining to an officer that the reason for speeding was because your dog has a need for speed? Thankfully I have never had this happen.

Both Moose and Red travel in soft-sided crates when we are in the car. At first we used a single crate, but Red’s penchant for car sickness made it necessary to crate them separately. If Moose could talk, I’m sure he would tell us how gross his brother was. He couldn’t understand why Red was getting sick yet he was fine.

As for Red, it didn’t matter if we traveled a short distance to a dog park, or hours to a play date a couple states away. He still got sick in the car. We were meticulous about his food intake close to car trips, but that didn’t matter. He could be sound asleep and wake up long enough to vomit.

We tried specialized medications for car sickness, together with his normal anxiety drug to no avail. We were at a loss as to what to do, because once we got where we were going, he was fine. I think he tended to get sick more often going somewhere rather than coming home. Maybe he suffered from anticipatory anxiety like I do now.

The pups’ grandmom usually accompanied us on play date excursions. She always rode in the back between the boys. We learned that she was fast with a plastic bag whenever Red started retching. There was no mess in the vehicle and disposal was a snap. Thank goodness for grandmom’s willingness to catch her granddog’s vomit. Whenever we road tripped with Moose and Red, we were sure plastic grocery bags were added to their bye bye bag.

Red was an adult when he had car sickness, but he has since stopped. Maybe he outgrew it, who knows. We no longer have to monitor food intake. In fact, he gets treats at the acupuncture vet and can enjoy a puppacino on the way home with no problems. Moose and Red can even share one crate now without fear of messes.

While the car sick dog no longer gets sick, old age has brought another issue to replace it. I’m not sure there’s a technical term for it, but it’s peeing in the car. Both dogs wear bellybands to prevent any accidents during their travels. It looks like I traded one leaky end for the other! 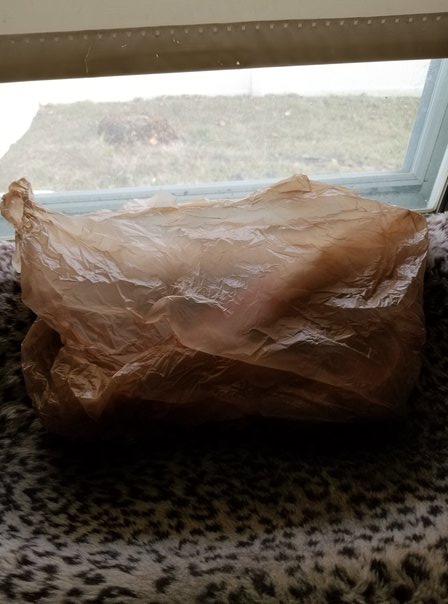