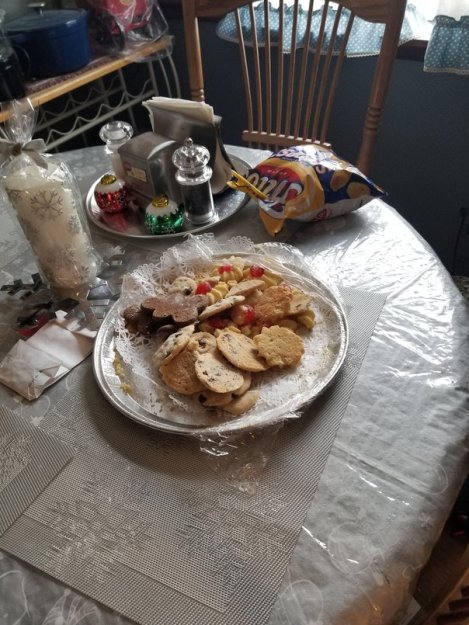 Happy 2020! I hope everyone enjoyed the holidays. The most wonderful time of the year involves family, friends, and food. Lots and lots of food. Tempting treats abound, and not just for the humans.

We ordered a two-pound cookie tray from the decades-old bakery located in town, just down the street from our house. Their delicious gingerbread men, chocolate chips, and cherry cookies have become somewhat of a holiday staple for us. While they were intended for Christmas Eve, no one had any room for dessert after enjoying the rest of the substantial holiday spread.

Because we had more food than people and places to put it, the kitchen table became host to a variety of treats, including the unopened cookie tray. This table is small and round, so space to put things is limited. I put the treats closer to the edge than I should have, assuming that the dogs were too old to be interested. You know what they say when you assume.

We were getting ready to go out one day during the Christmas break. I knew the dogs were roaming free from the confines of the baby gates, and I thought I heard them go into the bedroom. I didn’t see them walking around, so I figured they burrowed under the bed covers, hiding out until it was time for us to leave.

I didn’t think anything of the stillness of the house until I walked into the kitchen. The pups hadn’t gone back to bed at all. They were quiet because they were eating the cookies that had mysteriously made their way to the floor. Moose and Red were helping themselves to the treats. They were taught the “leave it” command, which saved them from potential disaster one time when chocolate fell on the floor, but I doubted that they would remember it from their puppy classes. Even if they did, they couldn’t hear me anyway. Instead, I swooped in and removed their bounty, now in pieces, from the floor. The aftermath looked worse than it was. They don’t have a full set of teeth between them, so I doubted that they ate much before I intervened.

How did the cookie tray end up on the floor? I didn’t have to see it to know what happened. I have no doubt that Moose was responsible for procuring the cookies. He is a notorious chow hound, with special skill. He will stand on his back legs at any surface containing food, stretching a front leg to paw at anything edible that he can knock to the floor. My guess is that Red was innocent in this debacle, but stood by to share the fruits of his brother’s labor.

The moral of the story is never underestimate blind, deaf dogs. While those senses diminish with age, the power of scent remains as strong as ever. I should have known they could locate and get into the treats left too close to the edge of the table. I did order a replacement tray, and that one is out of the way from the old men that still have some puppy in them. ♥